Phi Beta Kappa was founded on December 5, 1776, by students at the College of William and Mary in Williamsburg, Virginia. The oldest college in the South, William and Mary had educated many of the Virginians who were to distinguish themselves in the Revolutionary War and in the establishment of the government of the United States. Tradition tells us that the undergraduates who founded Phi Beta Kappa met in the Apollo Room of the Raleigh Tavern, a reconstruction of which is now part of Colonial Williamsburg. These early meetings followed the customs of the time in that they were both literary and convival.

The first span of the Society’s life at William and Mary was short, as the college had to close its doors on the approach of Cornwallis’s army in 1781. However, the founding members had taken a step in December 1779 that ensured the survival of Phi Beta Kappa by granting charters for the establishment of branches or alphas, as they were sometimes called at Harvard and Yale. The charters were given to Elisha Parmele, a graduate of Harvard then living in Virginia, who carried them north and organized the Alpha of Connecticut at Yale on November 13, 1780, and the Alpha of Massachusetts at Harvard on September 5, 1781. The Alpha of New Hampshire at Dartmouth College followed in 1787, chartered by the members at Harvard with the consent of the members at Yale. The principle of establishing new branches by concurrent action of those already in existence was confirmed with the founding of the next three: at Union College in 1817, Bowdoin College in 1825, and Brown University in 1830. Two more chapters, as they were beginning to be called, were founded in Connecticut in 1845; Beta at Trinity College and Gamma at Wesleyan University.

Sixteen chapters, all in the northeast except for three in Ohio and one in Alabama, were established between 1845 and 1883, when the organization of a federal union of chapters took place. The founding of the United Chapters of Phi Beta Kappa had its origins in the centennial anniversary celebration of the Alpha of Massachusetts at Harvard in 1881, when delegates were invited from the twenty chapters then active “to determine on any changes which may be necessary in the Constitution of the Fraternity.” The delegates approved the idea of a closer union, and a committee was appointed to draft a Constitution and Bylaws. Two years later, on September 5, 1883, the first National Council of the United Chapters met at Saratoga Springs, New York. Since then, charters for new chapters have been granted at the triennial meetings of the Council, which is composed of delegates from the chapters and associations. in 1988 the delegates to the Thirty-fifth Council voted to change the name to The Phi Beta Kappa Society, reflecting the increasing importance of the community-based associations to the organization.

In its early years, Phi Beta Kappa was a secret society, and new members took an oath “to preserve inviolate” the mysteries of initiation. The anti-Masonic agitation in the early nineteenth century, which included an attack on Phi Beta Kappa as a secret society, led the Harvard chapter to abolish the requirement of secrecy in 1831, an example followed gradually by other chapters. The Greek motto whose initial letters gave the Society its name — Love of Wisdom [is] the Guide of Life — remained as it was.

Another fundamental change in the character of the Society had preceded the disappearance of secrecy. At Yale and Harvard, and at the other northern colleges in which chapters were established, election to Phi Beta Kappa gradually came to be regarded as an honor conferred in recognition of academic distinction rather than an opportunity for undergraduates to cultivate stimulating friendships in college. This evolution was encouraged by the fact that members who were no longer in college soon came to outnumber the undergraduate members, and their interests in the literary aspects of the anniversary meeting helped to emphasize the scholarly objectives of Phi Beta Kappa. For more than 150 years, scholarship and good character have been the determining criteria for membership.

Women were first elected to Phi Beta Kappa in 1875 when the University of Vermont, which had recently become coeducational, found two women qualified for admission and admitted them. This precedent was followed by the chapter at Wesleyan a year later. Some of the other chapters were slow in opening their doors, but the principle that women are eligible for membership on the same terms as men was never seriously challenged and won general acceptance in 1898, when the Sixth Council of the United Chapters authorized the establishment of a chapter at Vassar College.

During the past century, as college enrollments have doubled and tripled and as curricula directed toward vocational training and technical education have begun to supplement, and even to supplant, the liberal arts programs once characteristic of every American college, the role of Phi Beta Kappa has become both clearer and more difficult. Phi Beta Kappa leaves to other honorary societies the recognition of academic success in fields other than the liberal arts and sciences. New charters continue to be granted only to Phi Beta Kappa faculty members in the College of Liberal Arts and Sciences of the sheltering institution, and candidates for membership in Phi Beta Kappa are expected to be enrolled in courses of study demonstrably liberal in character.

Whatever a liberal education may be, we know that it is not an education that is primarily vocational. In its original sense, which goes back at least to Aristotle, it is the kind of instruction that educates men and women in the fullest sense of the word: intellectually, ethically, socially. Thus, membership in Phi Beta Kappa is an honor conferred in recognition of scholarly attainment in the liberal arts and sciences.

The Alpha chapter of Wisconsin was founded on February 2, 1899 by 15 members of the faculty who themselves were inducted at Amherst, DePauw, Harvard, John Hopkins, Michigan, Northwestern, Rochester, Williams and Yale. 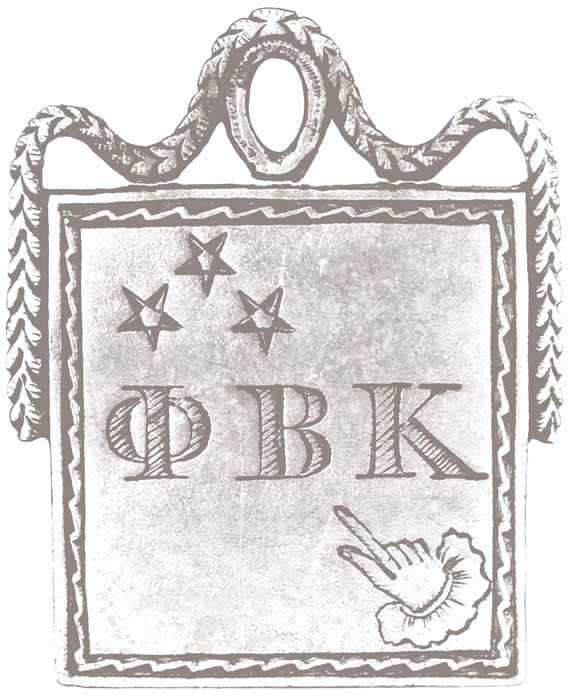